People of Huaian love eating noodles so much that Huaian boasts its noodles throughout China. What kind of noodles are the best in Huaian? On May 10th, an important event of the current Food Expo – “Huaian 10 Bowls of Best Noodles Competition” eventually produced 12 bowls of Best Noodles after more than three hours of live competition, during which 42 bowls of noodles made judges difficult to decide.

The competition of “Huaian 10 Bowls of Best Noodles” attracted nearly 60 noodle restaurants in all counties and districts of the city. “21 of them were finally selected to participate in the finals after preliminary recommendation by ciunties and districts and evaluation through on-the-spot investigation by experts.” Xu Zhihao, deputy director of the Municipal Bureau of Commerce, introduced the awards based on the total scores ranking in both the competition results and the previous mass online voting. The winning units were granted the awards of “Huaian Ten Bowls of Best Noodles” and the “Best Popularity Award in Huaian Ten Bowls of Best Noodles Competition” respectively. 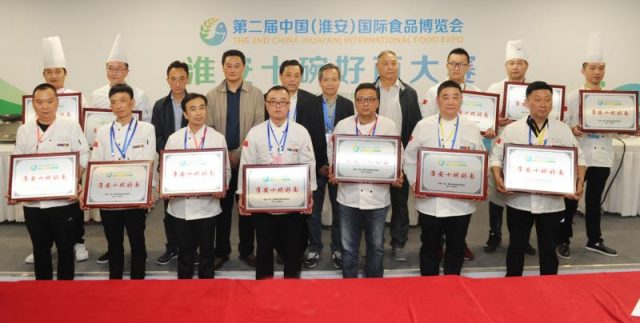 For so many kinds of noodles in Huaian, each noodle house had to make a bowl of designated noodles and a bowl of self-selected noodles in the final. There are soft pocket eel noodles, belly noodles, court dragon wiskers noodles, shrimp wonton noodles, chicken chowder noodles, etc. With the elaborate combination of noodles and vegetables, a total of 42 bowls of noodles were presented which smelled compelling and tasted smooth.

“These noodles include all the styles currently available in Huaian catering market.” “This is a real feast for Huaian noodles by gathering together soup, fried and stewed noodles” said Zhang Shenglai, a guest who commented on the competition.

Pouring is the distinct feature of Huaian noodles. The reporter noticed that most of the contestants chose pourings in the final. “Huaian pourings is unique in the whole country, hot and fresh.” Zhu Yulin, the judge of the final and China culinary master, said that Xiaochao is the most challenging and each pouring is less than normal dishes which needs to be cooked by fire and the timing of the fire is crucial to a chef's mastery.

Huaian noodles are traditional in every aspect

Huaian people are also particular about noodles. Zhu Yulin told reporters that Huaian's noodles also test a chef's control of the fire. “In this competition, some contestants choose Yangchun noodles, which seem simple but demand mastery.” Zhu Yulin said that in order to make a good bowl of noodles, Huaian people pay much attention to the the range of water, accounting for 70% - 80% of the area of the pot. If there's enough boiled water in the pot, noodles will float in a few seconds when cold water should be added. “Noodles are taken out of the pot and then put back within only few miniutes, the taste will be different. Only when you master the control of fire can the noodles be smooth and sturdy.”

In addition to the traditional Yangchun noodles, eel noodles, twice-cooked pork noodles and noodles with shredded meat, there are also some distinctive and innovative noodles in the final. A bowl of “Eight-fairy Stewed Noodles” was produced by Wuweiju Noodle House with shrimp, sea cucumber, fish maw, mushroom, green cabbage, egg slices and other ingredients. It tasted a compound flavor.” said Zhang Shenglai.

The belly noodles by Guhuai Noodle Restaurant seem mundane, but the soy sauce used by the chef is unique. “It is made with secret soy sauce together with sugar, ginger juice, and chicken soup.” As the rise of snake-head fish noodles in Huaian in recent years, chefs also considered a lot to drip a few drops of lemon in order to remove the fish smell.

The noodles made at home are always kneaded in the hands and stick together. At the scene, a chef waited for the water to boil, while kneading the noodles in his hands constantly. When the water boiled, the noodles were placed in the pot, and immediately they spread out without any adhesion. “A certain proportion of salt and alkali should be added here.”Zhang Shenglai analyzed that salt can make the noodles tough sturdy and alkali can avoid  sticking together. What's more, noodles kept kneading in the hands will be chewy.

A post-90s chef teaches the secrets

“Restaurant-cooked noodles are quite different from home-cooked noodles.” Lin Kai, who is 24 and a third-generation chef of the Linjia Noodle House founded in 1918, told reporters that for home-cooked noodles you just need to put noodles and condiments into the pot when the water is boiled. Restaurant-cooked noodles are more exquisite and tasteful. “We have to make a milky white soup called broth in advance every evening.” Lin Kai said you first fry the onion, ginger and garlic with oil in the wok, and then add different fine side dishes to make the special broth. When ordinary people cook at home, they like buying ready-made broth products at the outside supermarket, but the taste of those products is not as strong as the fresh one. “The most important thing about cooking noodles is the simmering of broth. For this reason, in order to make a good noodle soup, we will be very strict in the selection of materials. If the public want to make a bowl of tasty noodle at home, a pot of fragrant broth is a must.” Lin Kai said.

Huaiyang cuisine tastes sweet and we’d like to add some sugar and stir-fry noodles when we make them. Lin Kai told reporters that people may fry the eel and pig kidney directly in making eel noodles with pig kidney, but chefs in their restaurant would blanch them in warm water first and then deodorize them by adding some onions, ginger, and garlic to the pot. Also a clean cloth is used to cover the eel and kidney to maintain their temperature after they are put in plates. “We are not only particular about the temperature but also the way we stir fry.” Lin Kai said that, in general, the stir-fry of eel and kidney should not exceed five times, and they must be served fast in order to maintain their freshness. In addition to these, attention is also paid to serving the noodles. “The noodles should be picked up with chopsticks and then put in a forward and backward direction into the bowl.” Lin Kai said that when the noodles are ready, the ready-cooked dishes can be directly put on the noodles. Chopped green onion and black pepper are added to the noodles for the sake of beauty.

“This is my first time at the pasta contest.” Ms. Gao, who came to the site of Huaian 10 Bowls of Best Noodle Competition, said that she had planned to buy some food at the food fair. “But I didn’t expect to be at the competition of many famous chefs from well-known noodle restaurants in Huaian.

“Almost all chefs participating in the competition brought their own soup which looked very nice.” Ms. Gao said. She saw when the competition began, the chefs took out the soup they specially cooked and the tables were filled with seasonings. The competition started at one o’clock in the afternoon, and Ms. Gao had been watching it on the spot. One of the chefs’ sea cucumber noodles looked very inviting.

“I love pasta and it is always my favorite. But at home I can’t cook pasta with taste like this.” Ms. Gao said that she almost cooks noodles at home every morning, but the ingredients at home are relatively simple. She puts noodles into the soup cooked with lard. When the water is ready to boil, she simply adds some salt and chicken essence to the pot and the noodle is ready. “Today I learned a trick from the chef at the competition. When I cook the noodles at home next time, I will add some chopped green onion or egg flower.” Ms. Gao also told the reporter that she learned a lot about cooking noodles from the competition. She would cook some bone soup as broth at home, and add some fungus and mushrooms as ingredients. “Having enjoyed the smell of noodles the whole afternoon, I will take my children out to a noodle restaurant to satisfy my appetite.” Ms. Gao said.